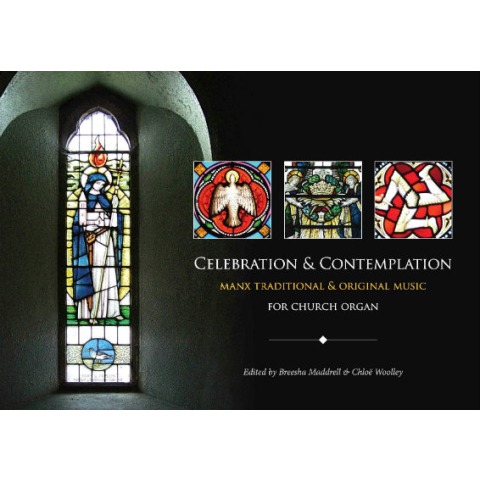 A book of Manx music that will appeal to churches, organists, music-lovers, couples planning weddings or partnership ceremonies, and family and friends around the world.¶ÿCelebration and Contemplation¶ÿis a collection of organ music particularly suitable for performance at weddings, church services and funerals, but with pieces that will also be enjoyed on other special occasions throughout the year.

For many years, there has been a call for a publication that brings together well-known Manx melodies such as ƒ??Ellan Vanninƒ?, ƒ??A Manx Weddingƒ? and the ƒ??Manx Fishermenƒ??s Evening Hymnƒ? as well as some of the traditional music associated with times of celebration and contemplation in the Isle of Man. Taking inspiration from existing Manx melodies, composers David Kilgallon, Gareth Moore, Oli King, Nicholas J Roberts and Frank Woolley have created new pieces which convey their individual style, meaning that there is something for everyone in this special collection of music.

Director of Music at King Williamƒ??s College, Gareth Moore, drew on a particularly personal story for one of his pieces, choosing his great-great-uncleƒ??s hymn tune ƒ??Maryƒ?? as a starting point. William C Southward CP, MLC was a key figure in Sulby Methodist Chapel, and he and his brother owned Sulby Woollen Mills, so Garethƒ??s reflective piece ƒ??Remembering Maryƒ?? is a wonderful tribute to his musical family tradition. If you love the¶ÿManx National Songbookƒ??s¶ÿƒ??A Manx Weddingƒ?? then you will be delighted to find a thoroughly modern twist on it in Nick Robertsƒ?? joyful rendition which ventures into 7/8. One of the oldest and most deeply beautiful hymns, the Kirk Christ Rushen Funeral Hymn, is set exquisitely by Frank Woolley, with the melody expanded upon to create a beautiful and powerful reverie.

Edited by Breesha Maddrell & ChloÇ® Woolley and published by Culture Vannin,¶ÿCelebration and Contemplation¶ÿdraws together slow airs and hymns, Gaelic songs and traditional dance tunes, in a wonderfully rich collection which reflects the strong tradition of church music in the Isle of Man.