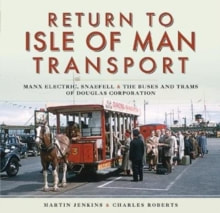 Return to Isle of Man Transport : Manx Electric, Snaefell & the Buses and Trams of Douglas Corporation

by by Jenkins Martin, Roberts Charles

This is the second book by Martin Jenkins and Charles Roberts, about transport in the Isle of Man. The first volume covered the railway network, where as this new volume covers all other forms, road, rail, sea and air operations. The book is illustrated, using previously unpublished rare early colour pictures, from the Online Transport Archive, which holds over a million transport images.

Both the authors have managed to collect together some truly interesting and often stunning pictures, from a period when colour coverage of transport subjects was almost non existent.