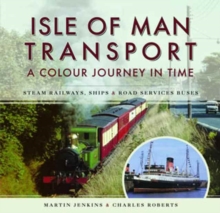 ƒ??This stunning selection of colour views, dating from the period 1953-1980, includes most of the vessels operated during this period by the Isle of Man Steam Packet Company and The Ramsey Steamship Company. Passenger boats and freighters are seen at ports on the island and on the mainland. There is comprehensive coverage of the Peel, Ramsey and Port Erin lines operated by the Isle of Man Railway with some outstanding views taken during the 1950s, together with excellent portraits of most of the locomotives, as well carriages, vans, wagons, lorries, stations, staff and signal boxes.

Also covered are Douglas Station and its environs, St John's junction and the Sunday 'specials' to Braddan. Many of the rich mix of bus types operated by the railway subsidiary, Isle of Man Road Services, are seen in a variety of locations. Included are some of the vehicles delivered just before and shortly after the Second World War.

There are good views of the fascinating Ramsey Pier Tramway and its unusual rolling stock, as well as rare scenes taken as early as 1953 on the Groudle Glen Railway. For anyone who loves the Isle of Man and its wealth of vintage transport, this book provides a remarkable trip down memory lane and a colourful reminder of some of its lost glories. The book is dedicated to the memory of John McCann who took brilliant colour views on the island starting in 1953.