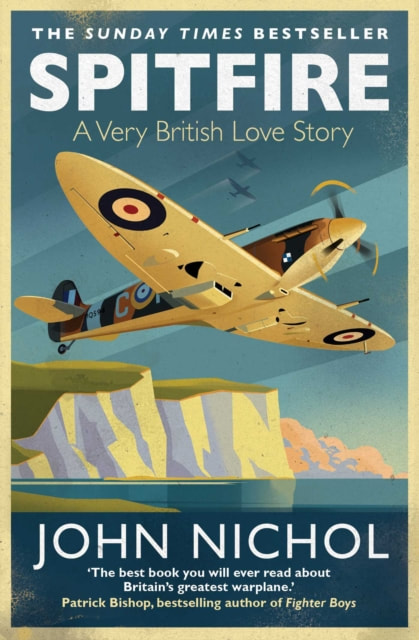 THE SUNDAY TIMES NON FICTION BESTSELLER 'The best book you will ever read about Britain's greatest warplane.' Patrick Bishop, bestselling author of Fighter Boys. 'A rich and heartfelt tribute to this most iconic British machine. By focussing on the men (and women) who flew the Spitfire, John Nichol has brought a fresh and powerful perspective to the story.

And by recording their bravery, humility, camaraderie, tragedy and sheer joy in flying their beloved Spits he has done them - and us - a valuable service' Rowland White, bestselling author of Vulcan 607 'As the RAF marks its centenary, Nichol has created a thrilling and often moving tribute to some of its greatest heroes.' Jon Dennis, Mail on Sunday magazine. 'A stirring portrait of a piece of aviation art in motion flown by the bravest of the brave. Nichol's Spitfire is still a sky-borne prima ballerina that kicks like Bruce Lee.' The Royal Air Force Times.

'A superb and compelling book. Brilliantly written with some incredible and astonishing stories; it is gripping, moving, emotional and sometimes humorous - just perfect' Squadron Leader (Ret) Clive Rowley, former Officer Commanding RAF Battle Of Britain Memorial Flight 'A superb journey through the remarkable tale of that British icon, the Spitfire. Brilliantly and engagingly written, this is the most readable story of the aircraft and her pilots that I have ever had the pleasure to read in a period spanning some forty-odd years of personal study and research.

But what happened to the redoubtable fighter and its crews beyond the Battle of Britain, and why is it still so loved today? In late spring 1940, Nazi Germany's domination of Europe had looked unstoppable. With the British Isles in easy reach since the fall of France, Adolf Hitler was convinced that Great Britain would be defeated in the skies over her southern coast, confident his Messerschmitts and Heinkels would outclass anything the Royal Air Force threw at them. What Hitler hadn't planned for was the agility and resilience of a marvel of British engineering that would quickly pass into legend - the Spitfire.

Bestselling author John Nichol's passionate portrait of this magnificent fighter aircraft, its many innovations and updates, and the people who flew and loved them, carries the reader beyond the dogfights over Kent and Sussex. Spanning the full global reach of the Spitfire's deployment during WWII, from Malta to North Africa and the Far East, then over the D-Day beaches, it is always accessible, effortlessly entertaining and full of extraordinary spirit. Here are edge-of-the-seat stories and heart-stopping first-hand accounts of battling pilots forced to bail out over occupied territory; of sacrifice and wartime love; of aristocratic female flyers, and of the mechanics who braved the Nazi onslaught to keep the aircraft in battle-ready condition.

Nichol takes the reader on a hair-raising, nail-biting and moving wartime history of the iconic Spitfire populated by a cast of redoubtable, heroic characters that make you want to stand up and cheer. John Nichol's new book, Lancaster: The Forging of a Very British Legend, is available now.